Congratulations to Our New Part-Time Magistrates
Several new part-time judges have been appointed to the DeKalb Magistrate Court. Congratulations to Sherry Boston, Lindsay Jones, Nora Polk and Phyllis Williams, who were sworn in by Judge Jeryl Rosh on October 14. Senior Magistrate Judge David Wood agreed to mentor the new judges. Both individually and collectively, they bring a variety of experiences that will serve our court well as we continue to expand our Civil and Criminal divisions. 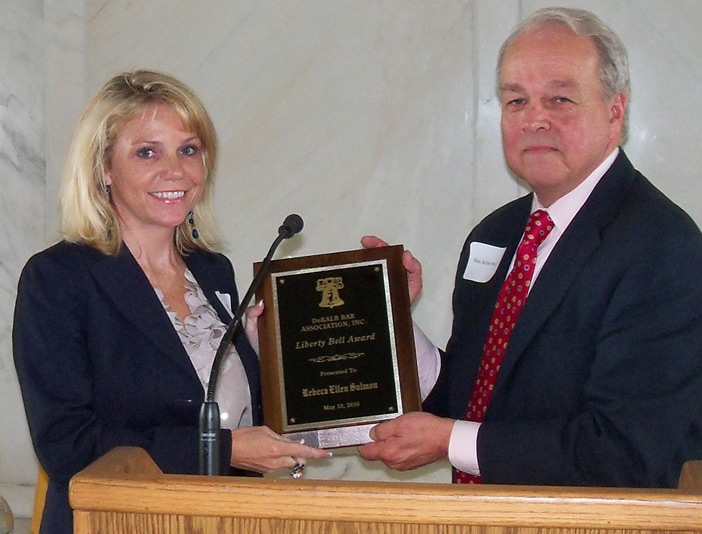 The Liberty Bell Award is awarded annually by the DeKalb Bar Association in conjunction with our Law Day program, for accomplishments in public service. Rebecca Ellen Salmon is this year’s recipient of the Liberty Bell Award for her work in the Immigrant Children Advocacy Project (IACP). Ms. Salmon received her J.D. from University of Georgia School of Law in 2007. During 2006 she had a law school internship at Catholic Charities and later continued to work there as an Equal Justice Works Fellow (EJW).

In years past, despite all the excellent candidates, the Law Day Award judges have been able to select a single candidate for the honor of Officer of the Year. This year, however, there were two nominees who went so far above and beyond the call of duty that it was decided that the tie could not be broken and both officers were deserving of the title “Officer of the Year.” 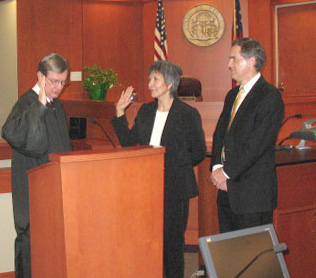 Nelly Withers was recently sworn in as Chief Recorders Court Judge by Judge Coursey. Judge Withers’s husband, John, is by her side.

Nelly Withers was recently appointed chief judge to the DeKalb Recorders Court and sworn in by Judge Coursey on Jan.7. Judge Withers has worked in DeKalb County for 17 years, first as an assistant district attorney under Bob Wilson, and again when she was appointed as an associate Recorder’s Court Judge in 2002. After working in the DA’s office, Withers practiced law part-time while her children were small, working on projects with the AOC, and as a SAG for the Attorney General’s Office doing 1983 litigation in the middle and northern districts and in the Eleventh Circuit. Before her appointment to the Recorders Court, she worked at McNally, Edwards and Bailey doing general practice and criminal defense. Judge Withers is married to John Withers and has two children, both students at the University of Georgia.

Many people showed up recently at the DeKalb County Courthouse to participate in the unveiling of the portrait of Georgia Supreme Court Chief Justice Carol W. Hunstein. The artist is Nancy Wallace of Decatur, who works exclusively in oil on…