Judge Daniel M. Coursey, Jr. is the recipient of this year’s Legal Pioneer Award, presented at the annual Bench and Bar reception. 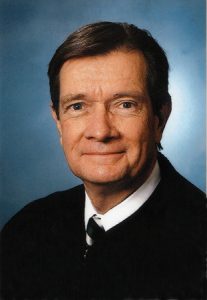 Born and raised in DeKalb county, Coursey is a graduate of Avondale High School, attended the University of North Carolina, and graduated from Emory University. He earned his law degree from the University of Georgia School of Law, where he graduated first in his class and served as class governor.

After university, Coursey served as a captain, trial counsel, and military judge in the Staff Judge Advocate General Corps of the U.S. Air Force. He then moved into private practice, where he specialized as a civil trial attorney with the firms of Powell Goldstein and McLaughlin & Coursey. In 1982, he was elected superior court judge in the Stone Mountain judicial circuit from a field of five candidates. Re-elected eight times, Coursey is the longest-serving superior court judge in the history of the Stone Mountain judicial circuit.

Thank you to all of our Bench and Bar sponsors. This event is made possible through your generous support. 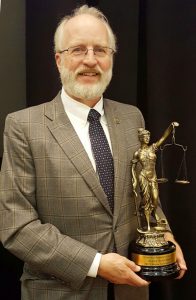 A highlight of the 2014 annual meeting for the State Bar of Georgia, held recently in Amelia Island, was the awards ceremony. DeKalb Bar News editor Jessica Reece Fagan proudly accepted awards on behalf of the DeKalb Bar Association for…

New offices in One Town Center Attorneys Doug Aholt and Bo Chambers are proud to announce the relocation of their firm, Chambers and Aholt LLC, to downtown Decatur. Their new offices are in the One Decatur Town Center building at…