by Rachel A. Elovitz

Two centuries and 21 years ago, on Sept. 25, 1789, the first United States Congress proposed 12 amendments to the U.S. Constitution, amendments independently and cumulatively calculated to safeguard individual rights. More than two years later, on Dec. 15, 1791, 10 of the 12 amendments were ratified by the states and known in the aggregate as the Bill of Rights.

My mother was in town this week from Florida. Unlike my wife and me, my mother is drawn to opinion shows that run on news networks. Notice that I did not say news shows that run on opinion networks. I will try to compose my thoughts in this article without leaning towards the left or the right, if you will. It simply strikes me as strange that given how little time I have to myself these days, others with equally scarce time spend it listening nightly to the opinions that others have on political or social issues.

Gear up for fun! Bring your bikes, bring your helmets, bring your sneakers — and don't forget to bring lots of friends and family for a bike safety course. The event is planned for Saturday, September 11, 2010 at Clarkston…

We members of the DeKalb Bar Association are fortunate to have an active and involved membership, which makes luncheons and networking opportunities fun and enjoyable. More importantly, we are fortunate to have dedicated volunteers willing to take on the various functions of officers, board members, section and committee chairs. Over the next few newsletters, we will be introducing you to the newest members of the DeKalb Board, et al. Please introduce yourselves to them at the various functions in the upcoming year.

August Board of Governors Meeting Highlights 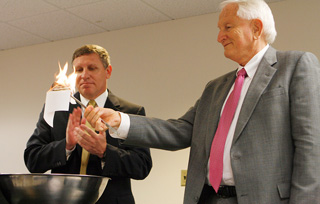 Photo courtesy of the State Bar of Georgia

Thank goodness the sprinkler system didn’t go off when State Bar President Lester Tate set aflame the Bar Center note that Executive Director Cliff Brashier held above a stainless steel bowl full of water. The note-burning ceremony during the Board of Governors’ August meeting marked the retirement of the approximately $4.2 million debt on the State Bar’s headquarters building at 104 Marietta St., which had been approved by the board in June.

Leading up to this moment, the board viewed a video featuring highlights of the dedication of the building in 1997 by U.S. Supreme Court Justice Anthony Kennedy as well as interviews with past presidents and Georgia Supreme Court justices who were instrumental in the decision to purchase the former Federal Reserve Bank building and transform it into the headquarters of our State Bar. Among them was past President Jimmy Franklin, who expressed concern that his tenure would be known as the “era of chainsaw Franklin” because his presidency in 2002 was marked by controversy over the removal of trees to expand the building’s parking garage.

Judge Arnold Shulman’s passing on Aug. 4 at the age of 96 may have marked the end of an era for DeKalb County’s legal community . . . and for this writer.

I was first introduced to Judge Shulman in 1991 as a UGA law pup who had started a litigation practice down the street from the DeKalb Courthouse. At the time Judge Shulman was a senior judge who could usually be found mentally warming up in the ninth-floor senior judges’ bullpen in anticipation of being called on to relieve the other judges from some of their workload: bond hearings, bench trials, emergency TROs, protective orders, and the like.